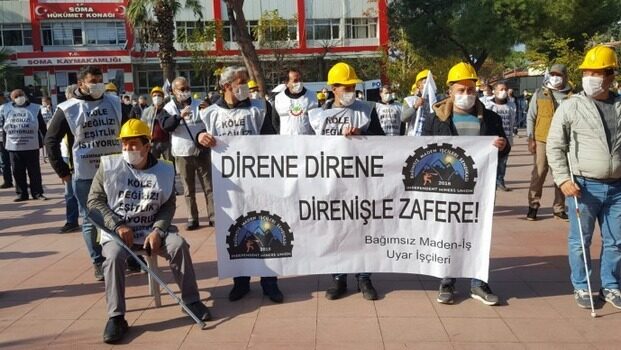 We would like to thank our dear friend Elçin Gen, who prepared this study by compiling the resistance story of the miners from Soma.

Victory came for the Miners of Soma (Turkey), who have been struggling for eight years to get their rights… After days and months of never ending negotiations and broken promises, brutality of state forces coupled with the hideous assaults of yellow unions, members of the Independent Miners Union are finally getting their fair share. This is a story of unfaltering resistance, of courage gained through solidarity, and of consciousness built by years of patient and arduous organizing.

A Spark To Ignite

Workers all around Turkey, as all around the world, are rising up against their exploiters and against the state apparatuses designed to empower and enrich them. Through work stoppages, wildcat strikes, workplace occupations, marches and demonstrations, those who have nothing to lose are struggling to break their chains. Right now there are countless groups of self-organized workers across the country who are tearing down the wall of fear, and for this very reason whose voices are blocked out from the media, i.e. trumpets of the powers that be. It is them the exploiters and their accomplices in state bureaucracy who are trembling in fear by the slightest hint of a united working class that yields neither by force nor threat, for they are perfectly aware that it takes only a spark, and that courage and hope is just as contagious as fear and desperation. Nationwide support for the miners has been yet another proof of this historical fact.

We, the Independent Workers Union, salute all our brothers and sisters across the country struggling to make ends meet under these barbaric conditions and fighting against further assaults on workers’ rights, on work safety, on pensions and indemnity, made under the pretext of a pandemic that has proved to be an industrial disease for all the sectors of the working class. We believe that the victory of the miners who took matters into their own hands shall be a torch in the long march of the laboring classes, to be held by those who are only beginning to lift up their heads.

Kamil Kartal from the Independent Miners Union challenging the military police who will take him into custody alongside several other unionists just a few hours after this speech. The video of his tirade, recorded by Kamile Çiftçi, became viral on social media, and the words “Is that so commander?!” became a nationwide catchphrase, standing for courage and determination, later to be used in other occasions and artworks.

It is them the exploiters and their accomplices in state bureaucracy who are trembling in fear by the slightest hint of a united working class that yields neither by force nor threat, for they are perfectly aware that it takes only a spark, and that courage and hope is just as contagious as fear and desperation. Nationwide support for the miners has been yet another proof of this historical fact.

When Uyar Mining Corporation in Soma was closed down in 2011, 748 workers were discharged without getting their severance and notice payments; some of them had unpaid wages, some couldn’t receive their injury compensation. They knocked on every door, resorted to so-called justice, waited in patience for the promises to be kept, until finally it became clear to them that they had no other choice than fighting for their rights. They joined with us, the Independent Miners Union, as we had run a successful campaign to secure the rights of thousands of miners elsewhere the previous year.

Ali Faik İnter: “Mining is a family tradition for us that passes from father to son, brother to brother. My father, Ramazan İnter, lost his life in 2002 in a mine accident. As if that were not enough, we were faced with the burden to prove that my dad was actually killed in an accident. It is the fate of Soma miners: They [the bosses] do not register those killed in a mine accident as death by accident so that they can bypass legal sanctions. We were alone at the time, and when you are alone against these powerful corporations it’s not easy to get your rights.”

Kamile Çiftçi: “I come from a family of miners, my brother is also a miner. When back in May 2014, more than 300 miners were killed in Soma pits, I was anxious about my brother and went there. Workers were demonstrating. That was when I first met Kamil Kartal and Başaran Aksu from the Independent Miners Union, and since that day I have never parted company with them.”

After many protests and public statements starting in August 2020, which were all met by the heavy hand of state forces, we launched a 370 mile march towards the capital, Ankara. We were blocked on each step, taken into custody, bruised and battered by the police forces, whilst each blow we received added to our resilience while building a wave of popular support that grew day by day.

Vanguards of the Art of Resistance

With the state forces taking every measure in their capacity to block our march, and a bunch of officials trying to stall us off and testing our patience, a nationwide support started to grow under the hashtag #Iwalkwiththeminers. Artists, actors and actresses, filmmakers and writers across the country declared their support through artworks and video messages. The courage and resilience of the miners brought out the feeling of hope that had been  buried for too long.

Aslı Alpar. Left: “The bulb darkens, the miner illuminates” [Bulb is the emblem of the ruling party AKP].  Right: “If you don’t give us our fair share, we will turn the ground inside out – and not for coal this time!”

Covers of “Leman” and “Uykusuz”, the two most popular comic magazines in Turkey, featuring the miners’ march.

On October 30, on the 18th day of our march, a 6.9 earthquake shook the city of İzmir (Smyrna), pulling down tens of faulty buildings that had been constructed by the profit seeking developers and licenced by local authorities, leaving hundreds of souls under the wreckage of a decaying capitalist urbanization.

We immediately formed a search and rescue team amongst our veteran miners, which headed to İzmir and participated in rescue operations.

“We must destroy this kingdom of undertakers who make graves to the people, and build a land of miners who run selflessly to rescue those trapped under the wreckage they create”*

A spontaneous campaign to build a Library of Solidarity with the Miners in Soma was launched by our supporters. The campaign is now being coordinated by the Urban Institutes (Kent Enstitüleri) collective

Still on the Watch

On November 16, the Ministry of Interior guaranteed that the miners will receive their long due payments in two months.

We won’t back down: We will keep our watch on the streets of Soma until each one of us gets his/her fair share.

You can download the booklet from the link below.